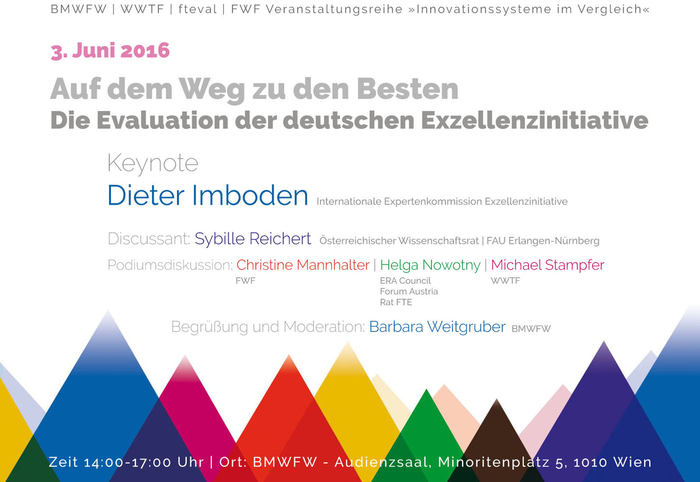 After the last  chair was taken in the audience hall of BMWFW, the event started – after an introduction by the head of the ministry Barbara Weitgruber – with a keynote of the chairman of the evaluation commission Dieter Imboden.

He reported on the organization, focus of the evaluation and the main “construction sites” of the German Initiative of Excellence. Particular importance was put on the unplanned or unwanted effects of this massive funding program.

Then, discussant Sybille Reichert – active in the Austrian Science Council and the University of Erlangen-Nuremberg – brought the internal perspective of a German university’s principal and the diverse effects that triggered the Initiative of Excellence at an institutional level, on stage.

On the podium, the discussion was broadened with inputs from Christine Mannhalter (FWF), Helga Nowotny (ERA Council, Forum Austria, Rat FTE) and Michael Stampfer (WWTF). These focused on the Austrian situation and the potential role model or learning effects of the German Initiative of Excellence. Their opinions were reflected by many questions from the audience.

The event is part of a series that compares the Austrian research system with those of other countries. Beginning with the fall 2010, Switzerland, Germany, France, Catalonia, Sweden, Denmark, Great Britain and Singapore had been subject of high-level presentations. The series is organized by the Platform for Research and Technology Policy Evaluation (fteval) in cooperation with the Federal Ministry of Science, Research and Economics (BMWFW) and the Vienna Science and Technology Fund (WWTF) as well as the FWF (in 2016).